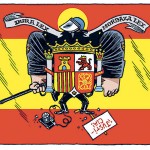 On 01 July 2015, the Ley Morzada or "Gag Law" (we recommend this article on the Citizen's Security Law, the most oppressive anti-protest law in Europe) and the Criminal Code reform, widely criticized by leading international NGOs including Amnesty International, Save the Children, Rights International Spain, Caritas and the International Federation of Human Rights, became law in Spain.

Not even the harsh judgment of the UN was able to persuade the government of Mariano Rajoy to abandon the draft of a bill which seriously undermines the right to dissent and peaceful protest. At midnight, about 200 protesters welcomed the entry of these laws with a silent protest in front of the Congress of Deputies. Today, Spain is a different country.

With the new rules, which according to the New York Times "disturbingly harken back to the dark days of the Franco regime", new modern instruments of repression are going to be applied. The two computer giants Indra and Accenture are competing for the creation of the future government software for online citizen monitoring. The Ministry of Interior requires that the company awarded the contract develop a program that can capture information on the following social networks: Twitter, Google Plus, LinkedIn, Tumblr, Instagram, Flicker (curiously Facebook is not mentioned), also on online forums, personal blogs, video platforms (YouTube, Vimeo and LiveLeak) and search engines (Google, Bing, Yahoo and Duck Duck Go).

It is still unclear what kind of content the software will be able to intercept, but according to the directives of the Ministry it will collect metadata, registration data of users and generated content. All this information will be indexed and stored in a permanent database that the authorities may consult at any time. What is the pretext? Always the same: the fight against "terrorism."

Waiting for what some already call the Spanish Prism, let's remember what the new prohibitions concerning the Internet are. Four articles that will forever change the way the Spanish use the web.

1. Tweeting about a protest could cost dearly

My tweet of 2012 is illegal today. The new law punishes those who organize/convene an unauthorized protest in the same way as those who spread online information about such an event. Article 30.3 of the Citizen's Security Law states that "organizers or promoters" can "reasonably" be considered those who, verbally or written, online or in print:

Fines range from 30,001 to 600,000 euros, without being judged (it is considered an infringement). Only after paying the fine will it be possible to file an administrative appeal.

2. Cyber-activism is synonymous with terrorism

The reformed Article 573 of the Criminal Code is aimed primarily at online activists and actions that (as of today) are considered "terrorist acts." They are included in the category of terrorist hackers, such as those who "destabilize the public peace" or "the operation of an international organization" on the Internet.

Promoting on Twitter an unauthorized demonstration in front of the Chamber of Deputies could be considered a terrorist act. Or blocking the web page of a government agency or the International Monetary Fund, for example.

3. Consulting propaganda websites will make you a terrorist

Besides the dissemination of terrorist material or the apology for terrorism, repeated access to websites that contain illegal information will also be condemned. Article 575.2 of the new Criminal Code provides for a sentence of between 1 and 5 years in prison for frequent access of such online content.

Although the Minister of the Interior has made it clear that journalists are not at risk of being prosecuted (this point is still not very clear), it is necessary to remember that, for example, a blogger who practices journalism without being linked could be charged with terrorism following periodic access to an ISIS recruitment portal.

Publishing and disseminating a video like this (shot three years ago in the Atocha station in Madrid, when the police fired blanks at eye level at demonstrators inside the subway) is a serious breach of the Citizen's Security Law, in accordance with Article 36.26. There is no difference if the police officers filmed are committing a crime: denouncing publicly unlawful conduct or an abuse of power is not considered a mitigating factor. Taking a simple photo of a police officer during a demonstration is punishable by a fine of up to 600,000 euros.

The repression passes, in most cases, for the allocation of new meanings to words. The word "terrorism" in Spain has been cleared of the sense that we knew, becoming an indefinite storage of a series of actions that until now have been considered a right.

If you live in Spain be very careful: one false step on the Internet and, in the best case scenario, you will have to pay a fine of 30,001 euros. You might even be tried for terrorism. 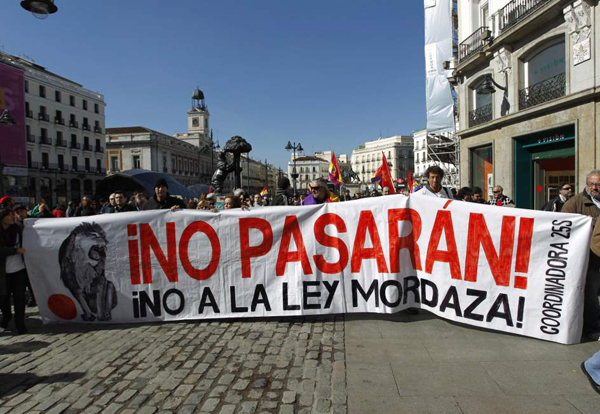