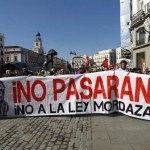 UPDATE 26 March 2015 - The Spanish Senate has finally approved the Citizen's Security Law, which will take effect in July. In some cases, sentences have been reduced compared to the text submitted to the Congress in December of last year. Demonstrations in front of the Congress of Deputies will be considered a "serious" offense, which corresponds to a fine of up to 30,000 euros (no longer 600,000 euros). The final text states that journalists who, in the exercise of their functions, record and shoot photos of police officers will not be punished. These changes are not sufficient to placate criticism of citizen movements, NGOs and journalists who denounce the serious attack on freedom of expression and criticism by the "Ley Morzada" ("Gag Law"). 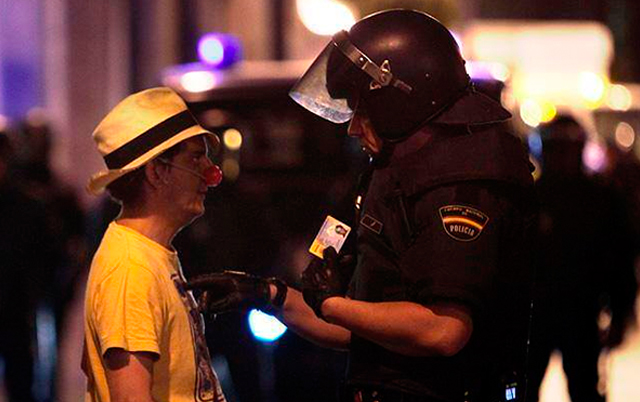 18 December 2014 - On the 18th of December the Spanish Congress of Deputies approved the controversial Citizen's Security Law, a legislative project very dear to Rajoy's Government and to those nostalgic for Francisco Franco. It has managed to gather the unanimous rejection of very different entities. From all opposition parties, organizations, movements of citizens and Amnesty International to trade unions and even police unions. The law was passed with only the votes of the People's Party, which has the absolute majority in both chambers. The next step will be the vote in the Senate, reduced de facto to a mere bureaucratic formality.

According to a survey conducted by Metroscopia, 82% of respondents opposed the law as it is and asks that it be modified or deleted. Since it was introduced a few months ago, expressions such as "gag law,” "return of the Franco regime" and repression of citizens have become increasingly frequent in the public debate. And not without reason. The Citizen's Security Law restricts the fundamental rights of dissent and freedom of expression, giving the government the power to punish citizens who are administratively sanctioned (without a judge's ruling) with penalties ranging from 100 to 600,000 euros. It also introduces a number of serious offenses such as setting up meetings in public places in order to express discontent, taking pictures or filming police officers with mobiles, demonstrating in front of the Parliament, shouting or singing during a “clandestine” demonstration, using a hashtag of an unauthorized protest on Twitter, demonstrating with a working uniform (for doctors, firefighters, police, etc.) trying to prevent an eviction, etc.

The rule is reminiscent of the Law of Public Order set by Franco in 1959, from which it borrows some essential aspects such as the delegation of sanctioning authority to the Ministry of Interior and the intimidating-repressive nature that underlies it. In other words, according to many experts, the fact that a person can be fined up to 600,000 euros, without having to go to court, is a clear violation of the legal rights of citizens. "This law is unnecessary, it violates European law and the European Convention on Human Rights and cancels fundamental rights, such as the right to protest and freedom of association," a deputy for the UpyD centrist party said in the courtroom on the day of the approval.

The testimony of the police involved will be considered sufficient evidence to proceed to the penalty. In the case of inability to pay the fine, there will be an ex officio seizure proceeding and sale of assets of the "guilty" (without being convicted in court). It will be possible to resort to legal action only after 'having paid the bill.'

The most critical aspects of the Citizen's Security Law 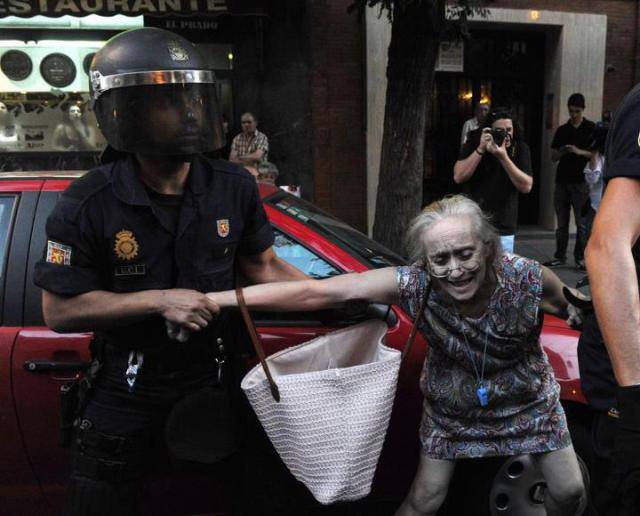 Many offenses already contained in the Criminal Code, and sanctioned until today through the courts, with the new rule will be administratively sanctioned (from 100 to 600,000 Euros, depending on the seriousness of the offence, at the discretion of the police). The fined person will go to court to contest the fine only after having paid. The greatest fear is that the Citizen's Security Law can multiply abuses of power by police with the aim to intimidate.

The complaints made by police officers will be the sufficient basis for adopting the corresponding resolution, unless the fined person can prove the contrary, at the very time of the infringement. Any testimony that contradicts the report of the police will be taken into account subsequently, only if the accused decides to appeal to the courts.

Without committing any criminal offense, you could lose all your assets (including your home) from one day until the next, just for expressing your dissent, which up until now has been possible since 1978. 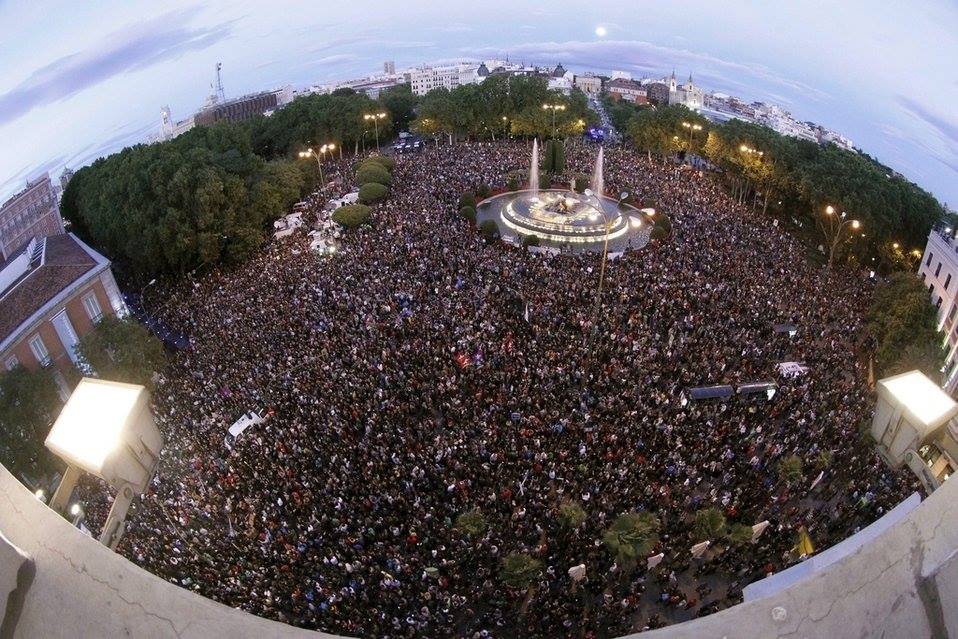 Meetings and demonstrations in front of the headquarters of the Congress of Deputies and the Senate, or regional governments, as long as they do not constitute a criminal offense, are considered a very serious attack on citizen safety. Organizers, promoters of the protest on social networks and participants are punishable.

Unauthorized meetings or demonstrations not communicated to the authorities which take place near public installations are considered a very serious transgression of the law because they endanger public safety, according to the legislature. Under the new law, protests of Public Health officials, who in recent years have defended the sacred right of citizens, are illegal. Organizers and promoters will be sanctioned.

It will be sanctionable to organize public performances or recreational activities in order to protest, without prior permission of the authorities. 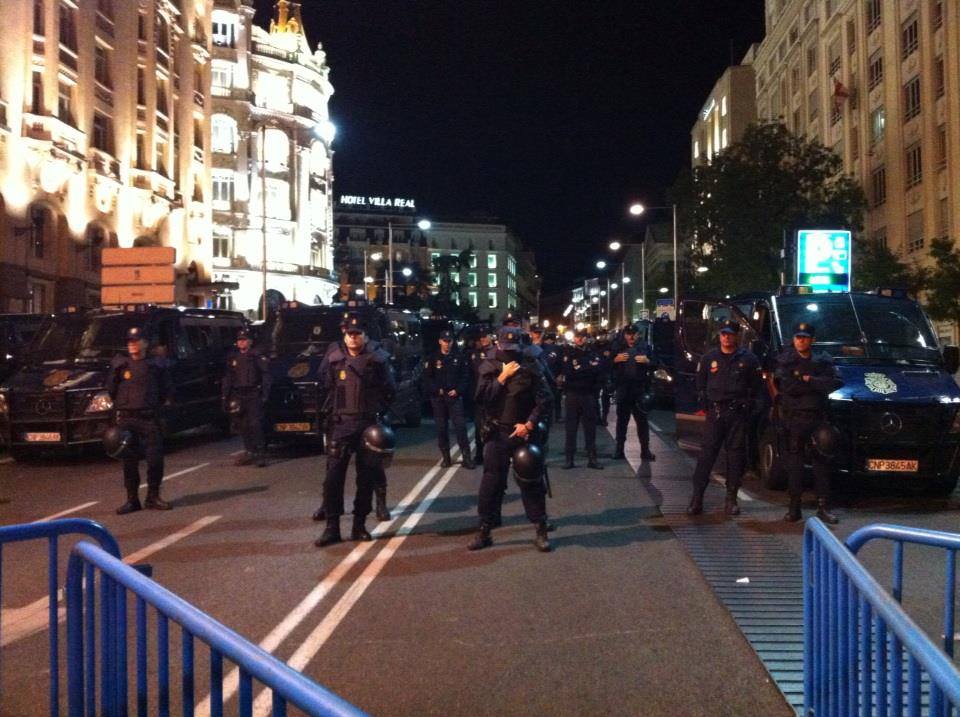 Photographing or filming a police officer during a demonstration or a protest with cell phones is considered a serious offense sanctioned with a fine of 601 and 30,000 Euros.

Interrupting or disturbing any public act, sport or cultural performance, or religious event is a serious breach of public security. Do you want to peacefully protest with a placard during a public speech of a mayor or a minister? It could cost 30,000 euros.

Disobeying or resisting the authorities, in the case that it does not constitute a crime, as well as the refusal to identify oneself, are considered serious offenses to public safety.

Refusing to abandon a demonstration or dissolve a meeting in places of public transit is an offense that will be punished with the new law, by administrative means.

Disturbing the development of a meeting or an authorized demonstration will be punished by a fine of 601 to 30,000 Euros at the discretion of the police.

Occupying installations in which there are basic services to the community or blocking the operation will constitute a serious offense.

The public use during a demonstration (or protest) of uniforms, symbols, official badges or copies of the same, even in cases where there is not committed any criminal offense, will be sanctioned. 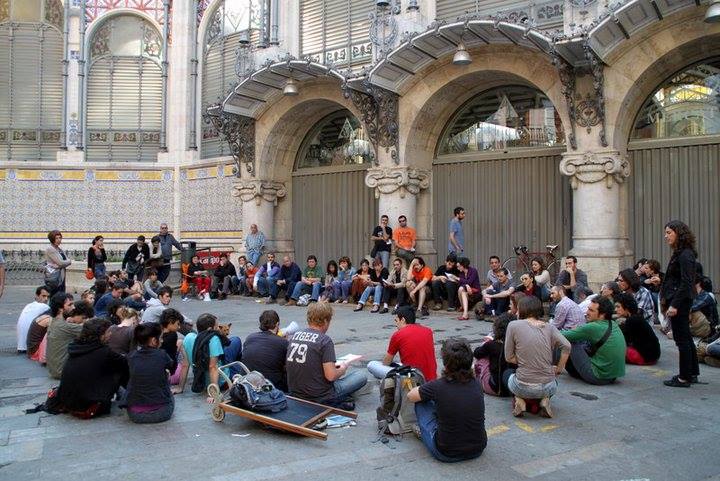 The lack of respect and personal considerations towards law enforcement, in cases where they do not constitute a crime, are considered, however, a minor offense.

Negligence in the custody of personal documentation will be sanctioned. If citizens lose their identity card three times over three years, a fine of 300 to 600 euros must be paid.

Organizing meetings in places of public transit is punishable by a fine from 100 to 600 euros.

In short, if you live in Spain and the only public event that interests you is the bullfight, you have nothing to fear.